Ever so often, we’ll be putting up posts for our ‘Common Questions Series’. As the name suggests, these are questions about the Faith that we often get. You know those ones – where you kinda, sorta, maybe  know the answer but aren’t sure if you know enough to give the asker a full response? Yeah, those ones. Baha’i Blog has decided to make a collection of those questions, which will hopefully be as helpful to you, our readers, as it is to us!

We’ve been getting a few questions recently about Naw-Ruz and its origins as a Baha’i Holy Day, so we’ll start with that! 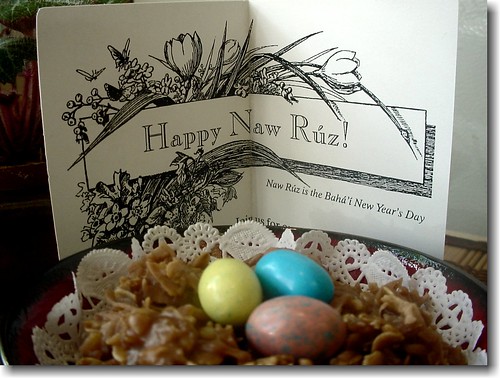 Is Naw-Ruz an Iranian holiday or a Baha’i Holy Day?

Naw-Ruz (which in Persian literally means “New Day”) is a New Year holiday for both Iranians and Baha’is celebrated on the first day of spring but the significance and celebrations between the two are slightly different.

The Baha’i celebration of Naw-Ruz is one of the nine Baha’i Holy Days on which work is suspended, and it was established by Baha’u’llah, the prophet-founder of the Baha’i Faith, to mark the feast day following the 19-day month of fasting. (The Baha’i calendar is made up of nineteen months, and each month consists of nineteen days). The Baha’i fast is essentially a reflective time of year, where those who are able, abstain from food and drink between sunrise and sunset.

To Baha’is the new year also symbolizes the renewal of time in each religious dispensation.`Abdu’l-Bahá, Bahá’u’lláh’s son and appointed successor, explained the significance of Naw-Rúz in terms of the equinox and spring-time and the new life it brings. In ‘Abdu’l-Baha’s words:

… This sacred day when the sun illumines equally the whole earth is called the equinox and the equinox is the symbol of the divine messenger. The sun of truth rises on the horizon of divine mercy and sends forth its rays on all. This day is consecrated to this commemoration. It is the beginning of the spring. When the sun appears at the equinox it causes a movement in all living things. The mineral world is set in motion, plants begin to sprout, the desert is changed into a prairie, trees bud and every living thing responds, including the bodies of animals and men.

The rising of the sun at the equinox is the symbol of life and the human reality is revivified; our thoughts are transformed and our intelligence is quickened. The sun of truth bestows eternal life, just as the solar sun is the cause of terrestrial life.

The day of the appearance of God’s messenger on earth is ever a sacred day, a day when man commemorates his lord.

As with most Baha’i Holy Days, there are no particular fixed rituals or practices associated with the holiday. With adherents from so many parts of the world, the Baha’i Faith makes careful attention not to impose one cultural tradition upon other traditions but rather to encourage an organic international Baha’i culture that emerges based on the Holy Texts and not on personal or cultural traditions. So, on an international level, the celebration is generally observed with a meeting consisting of prayers, feasting and joyful celebration open to all. What that actually looks like from one place to another largely depends on the way in which a Baha’i family or community chooses to celebrate the Holy Day.

Although celebrated in a different fashion, Naw-Ruz is also celebrated by Iranians and Zoroastrians as the new year. The origins of Naw-Ruz are unknown but it is thought to have begun as a pastoral spring festival. As time turned, Naw-Ruz gradually became a secular holiday in Persia and, as such, continued to be observed even after the spread of Islam in Iran. Muslim kings in Iran, like their Zoroastrian predecessors, celebrated Naw-Ruz with great magnificence.

Though not a Baha’i tradition, some Baha’is from a Persian background honour the traditions associated with their cultural heritage by infusing their celebrations with elements of a traditional Persian celebration of Naw-Ruz. These traditions might include families gathering in new or freshly cleaned cloths or the decoration of tables with fruit, cakes, coloured eggs and other treats, as well as symbolic objects such as a holy book and a mirror. Among the best known customs of Iranian Naw-Ruz is the “haft-sin” – which in English translates to the `seven S’s’. These are seven objects whose Persian names begin with the letter ‘S’ such as hyacinths, apples, lilies, silver coins, garlic, vinegar and rue, which are chosen and decoratively arranged on a table.

Persian traditions or not, Naw-Ruz always comes with generous hospitality and a delicious feast to enjoy!

What about you? We’d love to hear how your respective cultural backgrounds and the associated ideas of new year celebrations have shaped the way you commemorate the Baha’i New Year!