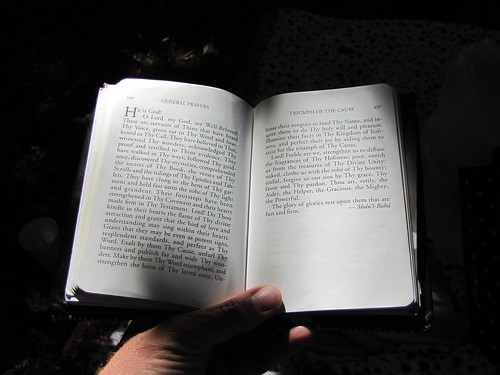 When I became Baha’i, the concept of prayer wasn’t new to me. I had been raised with the knowledge that prayer is an important component of our spiritual growth and a means of drawing nearer to God. Although I had been taught to say the Lord’s Prayer and reflect on it as the model of prayer that Jesus had revealed, my personal experience of prayer had generally been limited to spontaneous prayer – that is, the act of saying whatever came to mind based on what I felt I needed to ask for, like a child would to a parent.

So when I came across my first Baha’i prayer book, I remember finding the concept of reading prayers that had been revealed (instead of just saying whatever came to mind) to be somewhat foreign and very interesting. The typical Baha’i prayer book consists of a collection of prayers revealed by the Bab, Baha’u’llah and ‘Abdu’l-Baha, and usually categorises them under headings such as “Aid and Assistance”, “Children”, “Detachment” and so forth, depending on the content of the prayers. I remember looking through the categories in my prayer book, somewhat bemused.

Which section should I turn to when I want to pray for a difficult situation with a friend? What about a desperate prayer for help specifically for a person about to sit an exam that she hadn’t studied enough for because she was too busy watching funny videos of cute kittens on Youtube the night before? For someone who had spent her life only really praying in times of need, the prayer book with it’s numerous categories of revealed prayers confused me. It truly was a foreign concept.

Baha’u’llah has the following to say about the power of using the words that have been revealed by God:

Intone, O My Servant, the verses of God that have been received by thee, as intoned by them who have drawn night unto Him, that the sweetness of thy melody may kindle thine own soul, and attract the hearts of all men. Whoso reciteth, in the privacy of his chamber, the verses revealed by God, the scattering angels of the Almighty shall scatter abroad the fragrance of the words uttered by his mouth, and shall cause the heart of every righteous man to throb.

The phrase “scattering angels of the Almighty” always causes me to wonder at the mystery of revealed prayers and their effect. Shoghi Effendi makes reference to this mystical aspect of reciting the revealed prayers:

These daily obligatory prayers, together with a few other specific ones, such as the Healing Prayer, the Tablet of Ahmad, have been invested by Baha’u’llah with a special potency and significance, and should therefore be accepted as such and be recited by the believers with unquestioned faith and confidence, that through them they may enter into a much closer communion with God, and identify themselves more fully with His laws and precepts. Directives from the Guardian

I remember the first experience I had with prayer that opened my eyes to the power of using the prayers that have been revealed to us. One day, I found myself so completely consumed by a personal problem that was so overwhelming and complex that I couldn’t find a category in the prayer book that seemed appropriate. So, I decided to turn to the prayers under “Tests and Difficulties” in my prayer book, hoping to find a standard prayer asking God to wave a magic wand and just fix everything.

Instead I came across this prayer.

O Thou Whose tests are a healing medicine to such as are nigh unto Thee, Whose sword is the ardent desire of all them that love Thee, Whose dart is the dearest wish of those hearts that yearn after Thee, Whose decree is the sole hope of them that have recognized Thy truth!  I implore Thee, by Thy divine sweetness and by the splendors of the glory of Thy face, to send down upon us from Thy retreats on high that which will enable us to draw nigh unto Thee.  Set, then, our feet firm, O my God, in Thy Cause, and enlighten our hearts with the effulgence of Thy knowledge, and illumine our breasts with the brightness of Thy names.

Now, this prayer has since become one of my favourite, most cherished prayers. But let me say that back then, I did not get it.

Tests as a healing medicine? What? My particular problem which I was so desperately trying to have resolved definitely felt nothing like healing medicine. Ardent desire? Um, I really don’t think so. Dearest wish of my heart? Sorry, but what is going on here? And so I kept flipping the pages looking for a prayer more along the lines of “God, please please please pleaaaaase just get rid of this problem for me”.

Eventually I found this prayer revealed by the Bab, which I happily decided was more appropriate.

O Lord!  Thou art the Remover of every anguish and the Dispeller of every affliction.  Thou art He Who banisheth every sorrow and setteth free every slave, the Redeemer of every soul.  O Lord!  Grant deliverance through Thy mercy, and reckon me among such servants of Thine as have gained salvation.

But still, I found myself going back to reread the first prayer that I had come across. As my eyes scanned the words over and again, something interesting happened. I stopped dwelling on my problem and began to reflect more on the fact that I had a test at all and considered what that really meant on a deeper level. Are tests really a healing medicine? Why would something that seems so difficult be an ardent desire and dearest wish for those who love and trust God?

Rereading the words on the page, I found myself slowly starting to understand how the tests in my life – difficult though they may be – were in fact a healing medicine because of the numerous and profound opportunities they provided me to grow spiritually and develop qualitiesthat I’d never had before. The more I reread the prayer, the more I understood about the real significance of tests and their importance.

Eventually, I found myself feeling less upset about my problem, not because the outcome had changed, but because I was now looking at it with a different perspective. By reading the prayer revealed by Baha’u’llah and meditating on its words, I had gained the ability to understand the full reality and significance of my circumstances and had developed a heightened spiritual perception.

Baha’i prayer is by no means restricted solely to reading the prayers revealed to us. Prayer can, of course, be spontaneous. Baha’u’llah teaches us that our whole life should be a prayer and that every thought, word and deed done in devotion to God and for the service of humanity is, in fact, prayer.

But now, in a moment of need, I find myself turning to the revealed prayers instead of asking God for what I think I want, because every single time, reading a prayer prevents me from being so absorbed in my own emotions that I lose sight of the bigger picture. The prayers revealed by Baha’u’llah and the Manifestations are not only powerful because of the potency of their words but also because they remind us of the greater spiritual truths that are so easy to forget when we get bogged down by the mundane trivialities of our physical existences.

As for the circumstances which I used to think warrant desperate prayers requesting a magic solution? Well, let’s just say I’ve learnt not to watch funny Youtube videos of cute kittens the day before an exam.