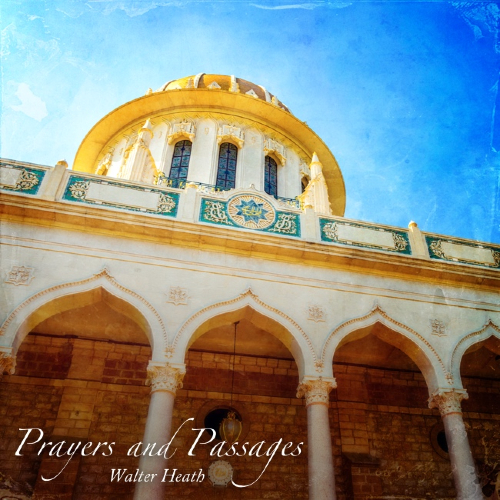 Walter Heath is a long-standing singer and songwriter who uses principles based on the oneness of mankind for inspiration in his music. He has participated in our Studio Sessions series with the song O Children of Men, and he’s recently created an album of devotional music based on the Writings of the Bab. Titled Prayers and Passages, this nine-track album features soaring melodies and guitar accompaniment.

The album is a joy to listen to, and it’s a joy to hear from Walter about how it came to be. Here’s what he shared with us:

Baha’i Blog: Hi Walter. Can you tell us a little bit about yourself and your music?

I was born and raised in Dayton, Ohio (USA). We were a strong church-going family. My father was a Baptist minister and we all were singers. At round 16 years of age, I sang with two good friends, and we sang in clubs for several years. I continued doing that when those friends were drafted. I did that until I moved to California in January of 1968. By June, I became a Baha’i and began singing with Baha’i folk groups, The Messengers and Wednesday’s Children. During that time, I taught myself to play chords on the guitar and began writing songs. In 1971, I was an opening act for several name artists on tour. After that, Marcia Day became my manager and I opened for Seals & Crofts periodically over the next eight years or so. During that time, I was signed to a recording contract with Buddah Records, and released an album titled You Know You’re Wrong, Don’tcha Brother. It wasn’t until 2004 that I was on another album featuring my family titled All Things Are Of God by A Family Affair. In 2009 I released an album titled Praise His Name.

Baha’i Blog: Can you tell us a little bit about the album ‘Prayers and Passages’?

In 2010, 19 songs were written and recorded for the project. On this CD, eight of the nine songs were composed to prayers and passages from the Writings of the Bab. The other is a passage from the Writings of Baha’u’llah regarding the Bab. The songs were recorded with only guitar and vocal. The second CD, Prayers and Passages II, has 10 songs. It was not released due to an accidental misrepresentation of a line in the passage on one song, and a mis-spoken line on another.

Baha’i Blog: What was the main idea behind this album and why was it important for you personally to make it?

This set of nine songs was done to raise funds for the renovation to the dome of the Shrine of the Bab in 2010. It was my way of contributing to that fund as well as promoting the Writings of the Bab.

Baha’i Blog: What do you hope listeners will walk away with after hearing this album?

The Writings of the Bab are from God! Often, the focus of study and deepening of the Baha’i Sacred Writings, is on the Writings of Baha’u’llah and Abdu’l-Baha. So, for me, it was the joy of being inspired by the Bab’s Writings and seeing how that inspiration was transformed into songs. Also, it was a way to memorize those sacred Words. My hope is that it does the same for others.

Baha’i Blog: Do you have any suggestions for others who want to share their art?

Most people have wonderful art within them, no matter the form. If it brings joy to you, it will bring joy to others. Be brave and share it. I’ve wasted a lot of years doubting myself. I’m still working on that obstacle.

I’m working on another project titled “Food For The Soul”. There are two songs in the project with more to come. It will also be available on 9Starmedia.com.

Baha’i Blog: Thank you, Walter, for taking the time to share this with us.

You can find Prayers and Passages here on 9StarMedia.com: 9starmedia.com/walter-heath-prayers-and-passages

You can also find other music by Walter here on 9StarMedia.com: 9starmedia.com/walter-heath