In recent weeks, we have witnessed an array of photos, videos and other initiatives on social media feeds in honour of the bicentenary anniversary of the Birth of Baha’u’llah, Prophet-founder of the Baha’i Faith. With so many joyous events and artistic expressions, we thought we would share 21 examples of some of these expressions found online:

This wonderful website from the Baha’i World Centre aims to connect and share all the bicentenary celebrations occurring across the planet, from homes to Houses of Worship. 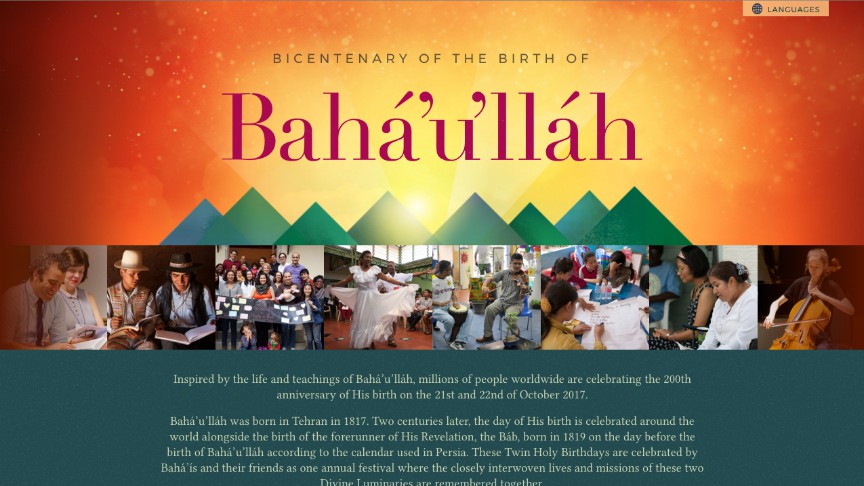 2. Bicentenary Letter from the Universal House of Justice

The Universal House of Justice wrote a unique letter, addressed to all who celebrate the Glory of God, to mark this historic occasion.

3. Feature Film: Light to the World

The wonderful film, produced by the Baha’i International Community, shares personal reflections from around the world about aspects of the life and teachings of Baha’u’llah and it illustrates how His Teachings are transforming the lives of individuals and communities.

4. Letters of Mention from Dignitaries and Officials

Read some public reports or media coverage of bicentenary celebrations from all corners of the earth!

Here is a glimpse of how the Baha’is of Da Nang prepared to celebrate the Bicentenary.

Dr. Sean Morrissey represented the Baha’is of Scotland and delivered a short address to the Scottish Parliament which summarized the significance of the Bicentenary.

In this short video produced by Hamid Mozaffari, a few Baha’is express their gratitude to Baha’u’llah on the bicentennial anniversary of His Birth.

8. Personal Reflections on the Baha’i Faith from Around the World

In honour of the Bicentenary, we launched an initiative that features portraits of Baha’is and their friends and a few of their words about what the Baha’i Faith means to them.

9. Year of the Nightingale – An Album by Luke Slott

We interviewed Luke Slott all about his album, ‘Year of the Nightingale’, which he composed in honour of the Bicentenary. You can read our conversation here or listen to the episode of the Baha’i Blogcast where Rainn Wilson interviews him here.

10. Facebook Group: Preparing for the Bicentenaries of the Twin Birthdays

A special Facebook group was created to share resources, ideas, and a spirit of joy. If you haven’t already, join and see photographs and stories of events from all over the planet.

12. 43 Baha’i Blog Studio Sessions Based on the Writings of Baha’u’llah

In preparation of the Bicentenary, we compiled a list of all of our Baha’i Blog Studio Sessions that put a verse or extract from the Writings of Baha’u’llah to music. At the time there were 43!

The Baha’is of the UK released a film titled ‘Baha’u’llah: The Divine Physician’. It shares the experiences of junior youth from across the country and how Baha’u’llah has brought the divine remedy for the world.

Tom Lysaght wrote a short book in honour of the Bicentenary that offers an introduction to the history of the Baha’i Faith using a dramatic narrative.

Here is an example of an individual’s creative expression of short video with an original composition to celebrate the Bicentenary.

16. Recognizing Baha’u’llah on the Bicentenary of His Birth: A Talk by Hooper Dunbar

Mr. Hooper Dunbar shares his personal reflections, thoughts and comments in regard to the worldwide spread of Baha’u’llah’s resplendent Faith and its healing Message. Given the close proximity to the bicentenary of the Birth of Baha’u’llah, Mr. Dunbar invites us to consider the progressive stages in the rise of the Sun of Truth and the potential offered for greater awareness of the role Baha’u’llah plays in our collective lives.

17. Rainn Wilson’s Essay ‘Me and The Prophet’

In this episode of the Baha’i Blogcast, Rainn Wilson reads his essay, ‘Me and The Prophet’ which was published on Patheos.com and which discusses his remarkable connection to Baha’u’llah.

18. The Ancient Beauty: An Album by Elika Mahony

Elika Majony composed an album to celebrate the bicentennial anniversary of Baha’u’llah’s birth and she shared how the album all came together in this interview.

19. ‘Light of Unity’ Dinner Party Booklet for the Bicentenary

20. A Dramatized Reading of E. G. Browne’s Meeting with Baha’u’llah

For a little bit of historical perspective, we shared a downloadable audio recording of a dramatic reading of E. G. Browne’s recollections of meeting Baha’u’llah.

A youth choir in Tanna, Vanuatu sings ‘One World’.

We hope you enjoyed this collection of just some of the examples of the artistic expressions we found online, and please feel free to share any others you may know of in the ‘comments’ section below.

Just to add one more, here is a link to a play called, A Gift for Baha’u’llah, put on in the Whittlesea, Victoria, Australia community for the Birth of Baha’u’llah bicentenary: https://www.youtube.com/watch?v=zyEjyEaaWuo. Enjoy!

Wonderful! Thanks for sharing, Alan!

Dear baha’i friend, Songel, Thank you so much for your wonderful service, which I receive regularly. In these 2 albums: https://photos.app.goo.gl/OwyV1wRK4XQfPfn93 , https://photos.app.goo.gl/i2wR6PUc6WRhxrvG3 I’ve made 2 collections of the 80 posters and 40 appreciations by the world’s personalities, shared by the friends via web for diffusion, if you like. Shahrokh [email protected] Italy

Thank you so much for sharing, Shahrokh!

Hi, anything similar for the bicentenary of the birth of the Bab please?

Hi Barnet, events for the Bicentenary of the Birth of the Bab still haven’t taken place yet, but in the meantime you may enjoy this: https://www.bahaiblog.net/2019/07/9-images-from-the-official-bicentenary-instagram-page/