Featured in: Day of the Covenant and The Ascension of Abdu’l-Baha

The Universal House of Justice has released a tribute to Abdu’l-Baha on the occasion of the centenary commemoration of His Ascension.

The tribute can be viewed and downloaded from the Baha’i Reference Library here: 27 November 2021 – A Tribute by the Universal House of Justice

For ease of reference we have also included the tribute in its entirely here:

A Tribute by the Universal House of Justice

A century has now elapsed since the noble spirit of Abdu’l-Baha ascended to its eternal home. His birth had coincided with the dawn of the Faith’s Heroic Age, and His passing signalled the setting of the sun upon its final epoch. No clearer demonstration could be imagined of how He embodied the forces of unity than the sight of His funeral, at which a vast crowd of mourners from every creed in this land came together to grieve their common loss. In His day, so many of the friends who embraced the Faith absorbed the spirit of the divine teachings simply by observing Him; still today, if we wish to align our lives with that same spirit, we look to the example set by the Master, Whose word and deed reflected the brilliance of the light that shone from Baha’u’llah’s Revelation.

In every respect, His example is central to Baha’i identity. Every Baha’i may turn to Him to understand better how to diffuse the light of the Faith and for a model to follow as we seek to awaken spiritual susceptibilities in those we encounter. His own counsel, that the teacher must be “fully enkindled” so that his utterance may “exert influence”, and yet be “totally self-effaced and evanescent” so that “he may teach with the melody of the Concourse on high”, is vividly realized in the unnumbered accounts of souls transformed by being in the company of Abdu’l‑Baha. Countless are the lessons to be learned from how He presented the divine precepts to every kind of person, constantly widening the circle of unity, without regard for any outward dissimilarities of appearance, language, custom, or belief. The universality of His love produced a community that, even at that time, could justly claim to be a cross-section of society. His love revived, nurtured, inspired; it banished estrangement and welcomed all to the banquet table of the Lord. Every community-building endeavour undertaken today, every educational activity and every outreach, carries with it the hope of communicating, through our own efforts, a token of the same love He showered upon every soul. Such efforts are the best tribute that can be rendered to Him, at this centenary and every day that follows.

We offer thanks to Baha’u’llah for having given the world not only, in His teachings, a standard of purity, devotion, and integrity to which souls may forever aspire, but also, in the Figure of the Master, a flawless example of how life can be lived to that standard. As humanity is beset by crisis after crisis, the community of the Greatest Name, which cannot avoid exposure to such upheavals, is privileged to have before it the model of Abdu’l-Baha. Neither peril nor obstacle would prevent Him from discharging His mission, whether by attending to the needs of the hour or preparing for the future; neither hostility nor events of the world would divert Him from His course. Serene, confident, and resolute, He was unperturbed by setbacks, welcoming hardship and adversity in the path of God. How relentless were the attacks upon Him! How deplorable the burdens He had to bear! We recall the testimony of His distinguished sister, the Greatest Holy Leaf, that “in the dark of the night, out of the depths of His bosom, could be heard His burning sighs, and when the day broke, the wondrous music of His prayers would rise up to the denizens of the realm on high.”

The passage of time has not diminished the awe with which we regard “the rôle and character of One Who, not only in the Dispensation of Baha’u’llah but in the entire field of religious history, fulfils a unique function.” And as Shoghi Effendi has further affirmed of Him:

He is, and should for all time be regarded, first and foremost, as the Centre and Pivot of Baha’u’llah’s peerless and all-enfolding Covenant, His most exalted handiwork, the stainless Mirror of His light, the perfect Exemplar of His teachings, the unerring Interpreter of His Word, the embodiment of every Baha’i ideal, the incarnation of every Baha’i virtue, the Most Mighty Branch sprung from the Ancient Root, the Limb of the Law of God, the Being “round Whom all names revolve”, the Mainspring of the Oneness of Humanity, the Ensign of the Most Great Peace, the Moon of the Central Orb of this most holy Dispensation—styles and titles that are implicit and find their truest, their highest and fairest expression in the magic name Abdu’l-Baha. He is, above and beyond these appellations, the “Mystery of God”—an expression by which Baha’u’llah Himself has chosen to designate Him, and which, while it does not by any means justify us to assign to Him the station of Prophethood, indicates how in the person of Abdu’l-Baha the incompatible characteristics of a human nature and superhuman knowledge and perfection have been blended and are completely harmonized.

Dearest co-workers: We summoned you here not only to honour the memory of Abdu’l‑Baha and to recall His trials and triumphs, but also, with us, to rededicate yourselves and the communities you represent to earnestly serving the Cause to which He devoted His very existence. In fulfilment of the sacred charge laid upon Him by the Blessed Beauty, He gave the Baha’i world custody of two Charters that have guided its progress and development ever since. One was His Tablets of the Divine Plan, through which the Word of God has come to be promulgated in every land; the other was His Will and Testament, which set in motion a process for the establishment of the Administrative Order. Now, at the close of the first century of the Formative Age, and at the outset of a new series of global Plans, the accelerating progress of the Master’s Divine Plan is plain to see. And the organic unfoldment of the Administrative Order over the last hundred years is demonstrated by the existence of the vast array of institutions and agencies, from the international level to the local, that channel the spirit of the Faith and guide and support the efforts of the worldwide Baha’i community. The Covenant of which Abdu’l‑Baha was the Centre remains an impregnable stronghold. We rejoice at how the Covenant orients each believer towards a common mission, maintaining a dynamic unity that cultivates a constantly growing community of the faithful.

Contemplating the Person of the Master, we find ourselves wonderstruck by the all-compassing authority that accompanied His inexhaustible patience and understanding, by the keenness of His wisdom in every setting, by the infinite tenderness of His being, and by His limitless love that can be felt by every unshuttered soul. But every prompting to pay homage to His matchless qualities is restrained by the recollection that never did He seek praise or worldly recognition. And so we feel compelled to testify: Beloved of all our hearts, Abdu’l‑Baha, Your all was servitude—a servitude “complete, pure and real, firmly established, enduring, obvious, explicitly revealed and subject to no interpretation whatever”. We reserve what words remain for a pledge of fidelity to You, for our vow to uphold the Covenant that You “proclaimed, championed and vindicated”, for our wholehearted expression of loyalty to Your timeless guidance and expositions, to Your fervent entreaties and exhortations. This same pledge is manifested in the steadfast, strenuous exertions of the Baha’i world to fulfil the mission entrusted to it at this time. Seeing this community striving to live by Your example summons up for us these words of Yours:

O friends! Praise be to God that the banner of Divine Unity hath been hoisted in every land, and the melody of the Abha Kingdom hath been raised on every side. The holy Seraph of the Concourse on high is raising the cry of “Ya Baha’u’l-Abha!” in the midmost heart of the world, and the power of the Word of God is breathing true life into the body of existence.

Wherefore, O ye faithful friends, it behoveth you all to join Abdu’l-Baha in self-sacrifice and in service to the Cause of God and thraldom to His divine Threshold. If ye be aided to attain unto such a supreme bounty, the whole world shall erelong be made the recipient of the effulgent splendours of God, and the longed-for oneness of humanity shall be revealed in the utmost beauty and charm in the midmost heart of the world. This is the dearest wish of Abdu’l-Baha! This is the greatest yearning of them that are faithful! The Glory of Glories rest upon you.

You can read this, and other messages from the Universal House of Justice, here on the Baha’i Reference Library: www.bahai.org/library/authoritative-texts/the-universal-house-of-justice/messages 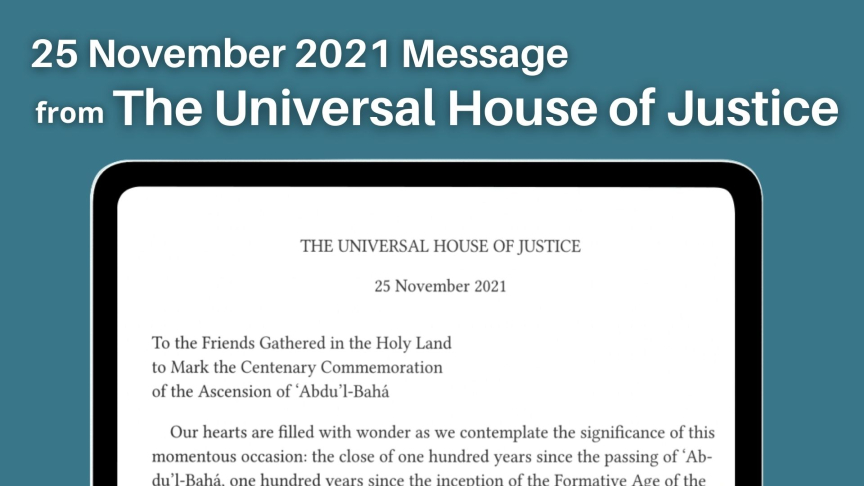 It is hard to decide when to open the window and let information in. There is so much out there banging at the shutters. Balancing inside and outside is tough.

You’re most welcome Jane, and thanks so much for your kind and encouraging words and support. So glad to be able to help in this. 🙂