There’s a well-documented scientific study that’s been all the rage in the past few years about something that happened in the Israeli Defence Force. Before entering the Defence Force, all the cadets had to sit pre-entry exams testing intellectual capacities like cognition and problem-solving, to physical capacities like fitness, endurance and the like. The cadets were then assigned to their training officers accordingly.

In this particular year, a couple of the training officers were told that they had tested and found the best of the best, ‘the mother-shawarma’ of all cadet groups, showing great promise for future leadership roles in the Defence Force. Other training officers were then assigned ‘regular’ cadets, and everybody started training.

Fast-forward a year and lo and behold the group that showed remarkable signs of promise did indeed deliver, and significantly out-performed all other groups of cadets in both intellectually and physically-based exams.

There was just one catch: END_OF_DOCUMENT_TOKEN_TO_BE_REPLACED

Participants at the 2013 Sydney Youth Conference worked together on creative presentations about the themes being studied. (Photo: Baha’i World Centre)

Prior to attending one of the 114 worldwide youth conferences in Sydney, Australia, I was grappling with the concept of coherence and what it looked like in reality to live a life that was not fragmented. I would look at all the different components in my life and wonder how it was possible for each of them to tie seamlessly together while still devoting my time to the progress of the Five Year Plan. I saw myself as a mother, a wife, a journalist, a Baha’i – with each aspect having its own distinct purpose.

The paragraph below, taken from the youth conference participant materials, expands on this idea of coherence: END_OF_DOCUMENT_TOKEN_TO_BE_REPLACED

There are thousands of reasons we can all be thankful for as Baha’is, and as there are two significant days on the Baha’i calendar this week — the Day of the Covenant followed a couple of days later by the Ascension of Abdu’l-Baha — something I’ve been personally reflecting on recently is the gratitude we owe Abdu’l-Baha for so many of the things which we perhaps take for granted relating to the Faith.

I’m sure we each have our own special relationship with Abdu’l-Baha, and as we continue to work towards understanding the special station of Abdu’l-Baha and the significant role He played in the course of Baha’i history and the covenant, I’m sure we could come up with a list of hundreds of reasons we all need to thank Him.

On that note, in honour of celebrating the Day of the Covenant, I thought it would be interesting to see how many things we could thank Abdu’l-Baha for, by asking you all to leave something in the ‘Comments’ section below. It can be anything which comes to mind such as a book you’re reading like Paris Talks, a prayer by Abdu’l-Baha which you particularly like, or something you’ve been reflecting on lately. END_OF_DOCUMENT_TOKEN_TO_BE_REPLACED

In the United States, freedom is highly coveted and when it becomes threatened, freedom is fiercely defended. The first amendment of the Constitution promises to protect these freedoms, guarantees that the American people have the basic right to things like free speech, free press and the right to assemble. Other countries may not emphasise these rights in the same way, but people the world over want the freedom to be themselves and to be free from oppression and prejudice. Indeed, a world without those troubles would be a liberated one. However, are there other ways to think about freedom? END_OF_DOCUMENT_TOKEN_TO_BE_REPLACED

As I sit in a comfortable chair and write this, I am well aware of the fact that I’m fortunate to live in a country where I’m able to enjoy the freedom to practice my religious beliefs as a Baha’i – and even run a blog about my faith – without the fear of being whisked away in the middle of the night by a group of armed men.

Unfortunately however, the luxury of religious freedom is not shared by Baha’is everywhere, and in Iran, the birthplace of our Faith, Baha’is  (as well as other religious minorities) continue to face discrimination and persecution.

Five years behind bars is a long time, in fact it’s five years too many, especially, when you consider that these individuals were arrested and imprisoned simply because of their religious beliefs.

As I look at a picture of these seven imprisoned Baha’is, I wonder what they are like as individuals – mothers, fathers, sisters and brothers, each with their own likes and dislikes, fears and aspirations, skills and passions, humor and personalities. There’s Fariba, a developmental psychologist and a mother of three; Jamaloddin, a once-successful factory owner who lost his business after the Islamic Revolution because of his belief in the Baha’i Faith; Afif, who ran his father-in-law’s textile factory because as a Baha’i he was unable to pursue his dream of becoming a doctor; Saeid, father of three and an agricultural engineer who was running a successful farming equipment business; Mahvash, mother of two, a teacher and school principal who was dismissed from public education for being a Baha’i; Vahid, a father, an optometrist and the owner of an optical shop; Behrouz, a former social worker who lost his government job in the early 1980s, also because he was a Baha’i.  END_OF_DOCUMENT_TOKEN_TO_BE_REPLACED

If God is All-Loving and All-Merciful, why would He allow so much pain and suffering in the world and cause such severe difficulties to befall us?

I am unspeakably fortunate to have never endured extreme poverty, been diagnosed with a debilitating or life-threatening illness, suffered the sudden loss of a family member, or experienced any other type of severe calamity that so many unfortunately have. But tragedy in some shape or form appears to afflict all of us at some point in our lives: it was Shoghi Effendi, the Guardian of the Bahá’í Faith and the great-grandson of Bahá’u’lláh, who described this life as the “home of suffering we call our earth” (Lights of Guidance, p. 207). When such suffering occurs, many of us will inevitably wonder the age-old question of why a beneficent God would ordain for our lives to be afflicted with such difficulties. END_OF_DOCUMENT_TOKEN_TO_BE_REPLACED

‘The common good’ is one of those phrases we trot out all too easily without considering in any depth what it might mean. When I was asked to give a short talk last November on the subject from a Bahá’í perspective, I had to give it some deeper thought than usual.

What, I wondered, is ‘the common good’? What is ‘good’ and who has the authority to say what is ‘good’? How common is ‘common’? Does everyone benefit from sharing the ‘good’ in question? Apart from a number of obviously common goods, such as the basic requirements for staying alive, don’t we have different needs? END_OF_DOCUMENT_TOKEN_TO_BE_REPLACED

In the late 1990s, the United Nations began recognizing August 23 as International Day for the Remembrance of the Slave Trade and of Its Abolition. On that date in 1791, slaves on the island of Santo Domingo (modern Haiti and the Dominican Republic) began an uprising that would be critical in the eventual abolition of the transatlantic slave trade.

There are few concepts more anathema to the Baha’i Faith than slavery. It offends a long list of Baha’i sensibilities as well as the Faith’s express tenets – from the equality of the races, to the importance of the family unit, to the equality of the sexes, and the general advancement of human rights. END_OF_DOCUMENT_TOKEN_TO_BE_REPLACED 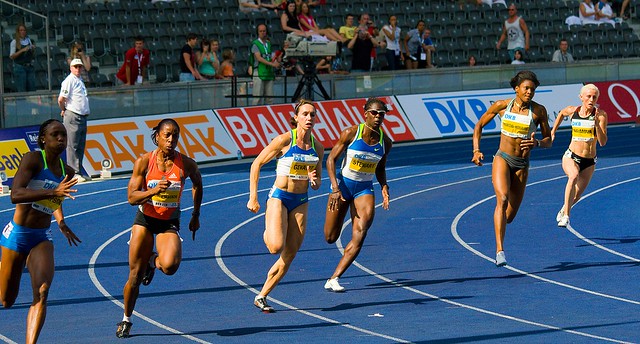 Every four years, the world witnesses some of the most incredible feats of speed, strength, and physical skill in the form of the summer Olympics. The hopes and dreams of nations often rest on the shoulders of the most physically skilled youth and young adults that countries have to offer. At times these hopes are dashed in the wake of defeat; at other times previously unknown individuals emerge victorious and are transformed into symbols of national pride. But regardless of the specific outcomes, it seems that every Olympics provides the world with dozens of captivating and inspiring narratives about perseverance, determination, and overcoming the odds.

Yet every Olympics also seems to rekindle the debate about the importance of sport and athletic competition in relation to other human endeavors. Are the Olympics a laudable venue for the celebration of physical prowess and the unification of countries, or does the fierce competition kindled by the Olympics simply reinforce the competitive mindset that often leads to conflict and contention among nations? How much value should we place on winning, or losing, in such competitions? And what is the role of sport and athletic competition in general in the broader scope of human affairs? END_OF_DOCUMENT_TOKEN_TO_BE_REPLACED