The melodious Elika Mahony has composed an album, titled The Ancient Beauty, in honour of the Bicentenary anniversary of the Birth of Baha’u’llah. Elika’s voice has a way of elevating your soul and this celebratory album is particularly uplifting.

Elika graciously shared with us what it was like to put together this album for this historic celebration.

Baha’i Blog: What inspired you to create this special album?

I remember the moment I felt inspired to create an album for the Bicentenary of Baha’u’llah’s birth. We were on Pilgrimage as a family in December 2016. On our last day we were walking towards the Shrine of the Bab. I suddenly felt a strong urge that I must seize this opportunity to create an album in English (I had already been working on an album in Chinese for the Bicentenary). At the same time I thought it would be crazy to try to produce a second album in just six months as it usually takes at least one or two years to compose, record and produce a quality album. But I knew I had to do it and so I prayed to find a way to make it possible. Through prayer and some creative brainstorming, I found a collection of songs I had recorded previously that were not on any of my published albums. In addition, I decided to compose a few new pieces, including one about the Titles of Baha’u’llah, in honor of the Bicentenary.

Baha’i Blog: How has creating this album differed from your other albums?

I felt a sense of urgency and importance while creating this album. Initially I also felt pressure to create some of the best compositions I have ever composed in order for it to be worthy of His Bicentenary. After praying and meditating about it I was able to move past the feeling of unworthiness and start composing as time was ticking! Creating this album was also different from previous albums because it was a contribution to the celebrations for the Bicentenary of Baha’u’llah, and I was aware that it was an opportunity that will never come again in my lifetime.

Baha’i Blog: What was something you learned in the process of making this album?

I learned more about what it means to rely on Baha’u’llah. There were many challenges that came about during the process of making this album, and I had to be creative in solving them and to have faith that He would assist me so that the album would be finished on time. There were so many different intricate details that this project needed from the cover design to the details of the recording of the songs. My goal was to release a project with excellence from the artwork to the beauty of the songs so that it could be given as a gift for His Birthday.

There is a beautiful quotation from Abdu’l-Baha that I often turned to for solace:

“Everything of importance in this world demands the close attention of its seeker. The one in pursuit of anything must undergo difficulties and hardships until the object in view is attained and the great success is obtained. This is the case of things pertaining to the world. How much higher is that which concerns the Supreme Concourse! That Cause involves every favor, glory and eternal bliss in the world of God. The seeker after the great guidance and eternal happiness necessarily will encounter difficulties. He must be patient under such circumstances.”

Baha’i Blog: What was something that particularly delighted you in the process of making this album?

Creating the packaging for the album was truly inspiring. I wanted this album to be unique and distinct from any other albums I have released so far. As I sat with my designer brainstorming over ideas for the cover, I knew I wanted a paper cut design as there is a beauty and sophistication in this ancient Chinese art form. We looked at a photo of the Shrine of Baha’u’llah and noticed the intricate ironwork on the gate at the entrance of His Shrine. We both immediately knew we had to incorporate that design in the paper cut. The first draft produced by my designer was fairly simple and while it was lovely it seemed that something was missing. Then we realized that the gate has a distinctive stylized “B” in the middle. So we did a new design with the “B” and it was perfect!

Baha’i Blog: It’s stunning! What was the greatest challenge in creating this album?

As it turned out, making The Ancient Beauty was the most difficult project in my entire musical career. There were so many obstacles and challenges that I started making a list of them – and I counted 19 difficulties in total! But in the end many of those challenges turned out to be blessings in disguise. The most striking example of this was that the sample disc we got back from the duplicator was unusable because of distortion. After trying to fix it twice (sending it back and forth to Shanghai where the duplicator was located), it was clear that we would have to find a different duplicator. Amazingly, we were able to find a new duplicator in Beijing in a day. Only later we realized it would have been impossible to get the CDs done in time from the first duplicator because it was in Shanghai. Being forced to find a new duplicator in Beijing ultimately made it possible to finish in time. So what originally looked like a huge crisis turned out to be the greatest blessing.

Baha’i Blog: What is your hope in releasing this album?

My hope in releasing the album was to create a dignified gift that can be given to friends, colleagues, family and neighbors as part of the process of acquainting as many people as possible with the life and teachings of Baha’u’llah during this special bicentenary year. Hence, in addition to the music, I wanted the package to be a beautiful work of art that would in and of itself attract hearts. We also added a short introduction to Baha’u’llah so that recipients could understand more about the purpose of His mission.

Baha’i Blog: Which is your favorite piece on the album?

“A Radiant Heart” is one of my favorites. One of the reasons I treasure this song is because it is a duet recorded with my daughter. Since she was very little, we have loved singing prayers together every night and continue to do so regularly. The quotation is taken from The Hidden Words of Baha’u’llah. This particular passage has special significance for all of us as individuals as it gives us a beautiful recipe for how to live. I often feel that if the world could only live this way it would be paradise!

The cello part on “A Radiant Heart” is also special. As we were recording the cello for other pieces on this album, we had 10 minutes remaining to record for this piece. I was worried that the cellist wouldn’t have enough time to record it but my producer and I decided to ask her to listen to the piece and play what came to her heart spontaneously. I was amazed and moved by the melodies she came up with on the spot and could tell she was inspired. We managed to record her just within the allotted time!

Also, this was the last song we recorded for the album and it almost didn’t happen as I was recovering from a severe cold and my daughter was busy with the demands of high school. I was determined to make it happen and am grateful we managed to record it as it is now one of my favorite pieces.

Baha’i Blog: What other projects are you working on now?

I am now thinking about working on a new album for the Bicentenary of the Bab in 2019 and plan on including one or two compositions from my daughter. I have also started preparing for Volume III of the Hands of the Cause of God booklets.

Baha’i Blog: Thank you so much, Elika, for taking the time to share these details with us and thank you for your beautiful musical contribution on this joyous occasion!

The Ancient Beauty can be purchased and downloaded from Elika’s website, music.elikamahony.com.

You can also watch a music video for its title track here on Baha’i Blog. 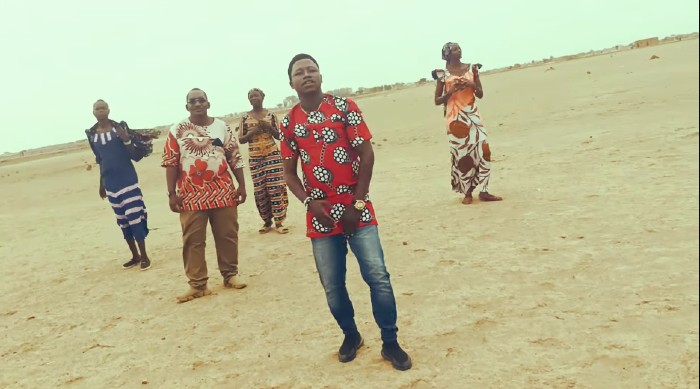 I See You Smiling – Ali Youssefi

Where There Is Love – Tom Francis