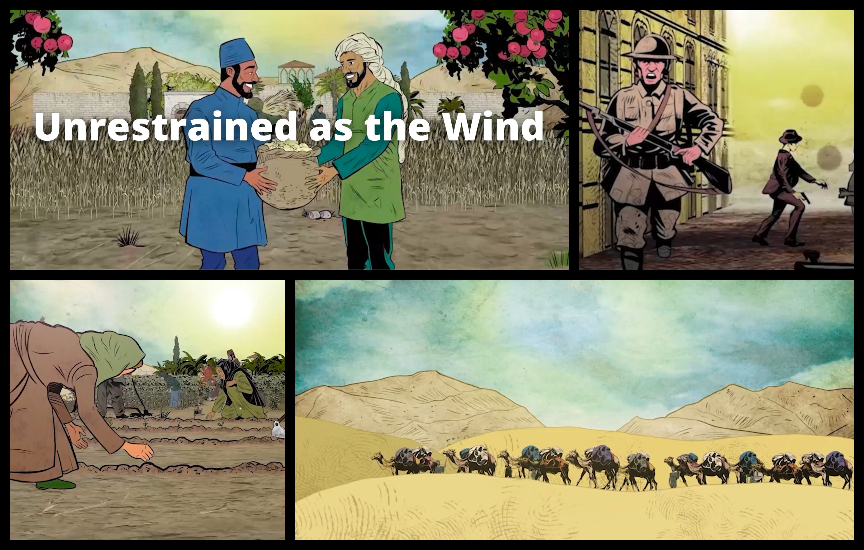 Baha’i Blog is excited to have recently published Unrestrained as the Wind: Abdu’l-Baha and Agriculture on our Youtube channel in both English and Persian, and it’s the fourth collaboration between PersianBMS and filmmaker Flavio Azm Rassekh on the life of Abdu’l-Baha.

This seven minute animation tells the story of how Abdu’l-Baha predicted the First World War during His travels to the West, and how He managed to protect the population of Palestine from starvation as a result of the conflict.

Like his other animations in this series, Flavio decided to focus on an aspect of Abdu’l-Baha’s life, and in this particular case, he sheds some light on the miraculous achievement of saving the lives of so many during a famine due to the First World War, and through the cooperative efforts of farming and agriculture.

I decided to touch base with my dear friend, Flavio, to find out more about this film and some of his thoughts behind it: END_OF_DOCUMENT_TOKEN_TO_BE_REPLACED

Abdu’l-Baha: The Mystery is a new six-part documentary series about the life of Abdu’l-Baha, the eldest son of Baha’u’llah, the Prophet-Founder of the Baha’i Faith.

Produced by Fred Badiyan and Ramin Khadem in honour of the centenary of the ascension of Abdu’l-Baha, these six films cover the life of Abdu’l-Baha in chronological order, from His childhood and imprisonment, to His travels and ascension.

Fred Badiyan and Ramin Khadem have created many wonderful films relating to the Baha’i Faith such as the Hands of the Cause of God documentary series, and others such as Crossing Frontiers featuring the life of Ruhiyyih Khanum.

Baha’i Blog was given the Rights to distribute “Abdu’l-Baha: The Mystery” on our YouTube channel, and we are extremely grateful to Fred Badiyan and Ramin Khadem for honouring us with this privilege.

I got in touch with Fred Badiyan to find out more about this new documentary series about Abdu’l-Baha, and here’s what he shared: END_OF_DOCUMENT_TOKEN_TO_BE_REPLACED

As Baha’is and their friends around the world commemorate the 100th anniversary of the passing of Abdu’l-Baha, the eldest son of Baha’u’llah, the Prophet-founder of the Baha’i Faith, I wanted to share a new podcast series made in honor of the life of Abdu’l-Baha called Ambassador to Humanity.

Ambassador to Humanity is a nine-part audio docu-series that recounts the life and work of this unique figure in human history, celebrating Abdu’l-Baha’s life, His legacy, and His enduring influence on humanity. The series explores how Abdu’l-Baha exemplified how to live with purpose and how to build a new world, and it includes eyewitness accounts from those who encountered Abdu’l-Baha, and commentary from those who have studied His life and example.

The podcast is produced by Rob Weinberg with lead narration by actors Rainn Wilson and Parisa Fitz-Henley, I caught up with the three of them to find out more about this wonderful new podcast: END_OF_DOCUMENT_TOKEN_TO_BE_REPLACED

This year marks the 100th anniversary of the Passing of Abdu’l-Baha, the eldest son of Baha’u’llah who led the Baha’i community after Baha’u’llah’s passing. Abdu’l-Baha is often referred to by Baha’is as “the Master”, but He preferred the title “Abdu’l-Baha”, which is Arabic for “Servant of Baha”, and He is considered the perfect example of how to live according to the Baha’i Teachings.

We’ve shared a diversity of content relating to Abdu’l-Baha on Baha’i Blog over the years, and we thought since this year is, as the Universal House of Justice puts it, a year of “profound reflection on the life of Abdu’l-Baha and the strength of the Covenant of which He was the Centre”, it would be useful to list some of the various Baha’i Blog posts relating to Abdu’l-Baha in order to help us feel inspired, and deepen our appreciation and knowledge of Him. Let’s begin: END_OF_DOCUMENT_TOKEN_TO_BE_REPLACED

As this year marks the 100th anniversary of the Passing of Abdu’l-Baha, we wanted to let you know about our special video made in His honor called ABDU’L-BAHA – Servant of Glory.

We typically interview artists and creators about their work and ask them what inspired them, what challenges they faced, and what words of encouragement they might offer others. I realized it would be really wonderful to pull back the veils and tell you a little bit about what goes into some of our own projects so in this interview I asked Naysan Naraqi, who produced ABDU’L-BAHA – Servant of Glory, to tell us more about the film. END_OF_DOCUMENT_TOKEN_TO_BE_REPLACED

As this year marks the 100th anniversary of the Passing of Abdu’l-Baha, a number of friends have asked me where they can find high-quality images of Abdu’l-Baha that they can use legally (without copyright restrictions) for their commemorations and activities. END_OF_DOCUMENT_TOKEN_TO_BE_REPLACED

Health in Iran: The Untold Story is the latest animation by filmmaker Flavio Azm Rassekh and inspired by Abdu’l-Baha.

In this collaboration with PersianBMS and Ganje Penhan, Flavio tells the story about the Syyhat Hospital and its adjacent educational facilities in Iran, which were built under the instructions of Abdu’l-Baha and run by American doctors who brought women’s health care and Western medicine to Iran.

In spite of all the great medical achievements in the West at the turn of the 20th century, Iran was still deeply immersed in a fog of superstition and fanaticism, and modern medicine was still looked at with distrust as almost 98% of the population was illiterate. While researching about the first Western-style hospitals in Iran, filmmaker Flavio Azm Rassekh found out that an important part of Iran’s history had been erased from the 20th century – namely, the Syyhat Hospital and its adjacent educational facilities, so he decided to bring this history back through this short animation.

As a follow-up to Flavio’s two previous animations called Breaking the Chains: The Story of the Girls Schools in Iran, and Through Their Eyes – Meeting Abdu’l-Baha, this film is the third animation created which is also inspired by the contributions made to society in Iran by Abdu’l-Baha.

I caught up with my dear friend Flavio, to find out more about his new animation: END_OF_DOCUMENT_TOKEN_TO_BE_REPLACED

We’re excited to share a new animation called ‘Breaking the Chains: The Story of the Girls School in Iran‘, an animated short film which tells the historical role Baha’is played in bringing education to girls in Iran in the early 1900s. The animation explains how in the early 1900s, only 5% of the population of Iran had access to basic writing skills, and knowledge of the sciences were kept exclusively to men. Breaking this cycle of oppression was no small feat, and that’s when Tahirih and Abdu’l-Baha come into the story.

The animation is in both English and Persian/Farsi, and it was made by my dear Brazilian-Persian friend, Director and Producer Flavio Azm Rassekh, in collaboration with PersianBMS.

I caught up with Flavio to find out more about it, and here’s what he shared: END_OF_DOCUMENT_TOKEN_TO_BE_REPLACED

This December marks the 100th anniversary of Abdu’l-Baha’s Tablet to the Central Organisation for a Durable Peace, better known as the Tablet to The Hague (you can read it online in its entirety on the Baha’i Reference Library here). In His letter Abdu’l-Baha places the attainment of international peace within the context of the need for wider political, economic and cultural change.

But what do we know about this Tablet? What was this Central Organisation? Why is this tablet also know as ‘Tablet to The Hague’? Why ‘The Hague’? When and why was this letter written? Who delivered it? Who received this letter and what was their response? In fact, there are two Tablets to The Hague. While the first letter is generally referred to as the Tablet of The Hague, what about the second one?

To answers some of these questions, a father-son duo have created a special webpage which you can see here. It is an English page on a Dutch website, called bahaigeschiedenis.nl, about the history of the Baha’i community in the Netherlands.

Its makers, Jelle and Adib, graciously agreed to tell us about their work, and here’s what they shared: END_OF_DOCUMENT_TOKEN_TO_BE_REPLACED