Featured in: Day of the Covenant and The Ascension of Abdu’l-Baha

Abdu’l-Baha: The Mystery is a new six-part documentary series about the life of Abdu’l-Baha, the eldest son of Baha’u’llah, the Prophet-Founder of the Baha’i Faith.

Produced by Fred Badiyan and Ramin Khadem in honour of the centenary of the ascension of Abdu’l-Baha, these six films cover the life of Abdu’l-Baha in chronological order, from His childhood and imprisonment, to His travels and ascension.

Fred Badiyan and Ramin Khadem have created many wonderful films relating to the Baha’i Faith such as the Hands of the Cause of God documentary series, and others such as Crossing Frontiers featuring the life of Ruhiyyih Khanum.

Baha’i Blog was given the Rights to distribute “Abdu’l-Baha: The Mystery” on our YouTube channel, and we are extremely grateful to Fred Badiyan and Ramin Khadem for honouring us with this privilege.

I got in touch with Fred Badiyan to find out more about this new documentary series about Abdu’l-Baha, and here’s what he shared:

Baha’i Blog: Hi dear Fred! Can you tell us a little about the story behind making “Abdu’l-Baha: The Mystery” and how it started?

Hi Naysan. Yes of course. Basically I had been given the honour of working on construction videos of the Shrine of Abdu’l-Baha in the Holy Land, and while doing that, it came to my mind that we should make a video, or a series of videos, about the life of Abdu’l-Baha because it’s fascinating, it’s absolutely fascinating! So once again I reached out to Ramin Khadem, my partner in making these Baha’i-inspired videos like the Hands of the Cause videos, and he agreed to make it with me. Ramin wrote the script, and then we co-produced what ended up becoming a six-part series. 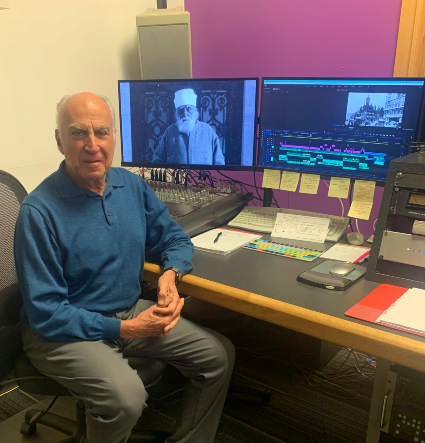 We wanted to start from the very beginning, and then go through Abdu’l-Baha’s life chronologically. We started from His birth and childhood, and then went on into His life in the prison city of Akka. He spent a lot of time there so we wanted to cover those years. We then covered what we called the “tumultuous years” and looked at many of the challenges Abdu’l-Baha faced. In the fourth video, we talk about His travels to the West, based on the time He spent in Europe and North America. In the fifth video we cover the end of His journey, and His time back in the Holy Land after He came back from His travels. And finally in the last video, and this one was also really interesting, we focus on interviews with people who had actually met Abdu’l-Baha, and capture some of those experiences in interviews.

Baha’i Blog: What were some of the challenges you had to overcome in making a video series like this?

There were many challenges in making this series, and not just one or two, but let me give you a couple of examples. For instance, one of the biggest challenges was that there were no pictures of the Abdu’l-Baha from His childhood until He was in Turkey and that’s the first time they got a picture of Him when He was a young. You know, then after that there are again absolutely no pictures until He was an old man. Anytime someone wanted to take a picture of Him, He would show His hand for example. He would say they could take a picture of His hand. So he wouldn’t allow any pictures, and creating a whole documentary about someone we don’t have many pictures of can be challenging, but we overcame it.

Another challenge is that there are a lot of books about Abdu’l-Baha, but if you want to include everything, the series would literally be over 10 hours, so we had to really see what we felt was important and then condensed it.

So those are some of the challenges.

Baha’i Blog: Are there any stories of Abdu’l-Baha that have inspired you personally, and that come to mind?

Oh yes, there are a lot of them! Actually in these videos you’ll see that from the very beginning of His childhood, Abdu’l-Baha was a loving, and giving, and caring personality. From His childhood, when He was seven or eight years old, one of the stories was that He went with the shepherds in the north of Tehran – you know Baha’u’llah had a lot of sheep – so basically He goes with the shepherds and they’re in the mountains, and when it comes to lunchtime, the shepherds tell Abdu’l-Baha that it is customary that when they all have lunch together, the owner of the sheep must give some sort of gift to them. Abdu’l-Baha thinks about it, and then tells them that all the sheep are theirs. So He gave the whole flock of sheep to the shepherds, and when He came back home, Baha’u’llah says that they have got to watch out for this child, otherwise He will give Himself away too. And this is actually what He ended up doing. He gave His life for the Faith. He was giving all the time, and all of His life He took care of the poor, He gave all His time, and yeah, it’s so true, He really did give Himself in the end to everyone.

Baha’i Blog: What do you hope people who watch this series of films about Abdu’l-Baha will walk away with?

I would like them to understand the station of Abdu’l-Baha. The unbelievable person He was. The fact that He had never been to school, was never educated, and was sent from place-to-place in exile and a prisoner. The harsh conditions He faced. And how this person could have that kind of station, that kind of knowledge. The things that He achieved is unbelievable. He was a prisoner almost all of His life. It’s truly amazing. It’s a mystery.

Baha’i Blog: Is there something for you personally that really inspires you when you think of Abdu’l-Baha?

I’m so inspired by Abdu’l-Baha, how even at an old age once He was released from prison, He went forward to teach the Faith and travel. This for me shows that age really doesn’t matter when it comes to service. If a person wants to serve, then they should really do it, because the age doesn’t matter. As long as we can open our mouths and talk, we can teach and serve.

Baha’i Blog: Thank you so much Fred for taking the time to this interview, and to you and Ramin for creating these wonderful videos, and for giving Baha’i Blog the honour of publishing them.

You can watch the the full six-part series called “Abdu’l-Baha: The Mystery”, or click on the links below for each volume below:

The new series “Mystery of God”, 6 parts, we are showing in our Ruhi class, one part each class.
At one time I saw an interview with Fred, but now I can only see the words.
Is it possible that you send me the link of the video between Fred and Naysan ?????
Naysan : Last week I spent at the Baha’i center in Stockholm and celebrated the Twin Birthdays and meet your aunt Simin 2 nights in a row.

Here is the video of Naysan and Fred:https://www.youtube.com/watch?v=mX7pa_-FfSY Thank you for asking!