It is humbling to see such an incredible flourishing of creative expressions blossom in honour of the Bicentenary anniversary of the Birth of the Bab, the Prophet-herald of the Baha’i Faith! You can feast your eyes and your ears on works of art, poetry, music, videos and dance from all corners of the planet on bicentenary.baha.org.

Savouring these artistic expressions makes me think of this call of the Universal House of Justice:

At the heart of these festivities must be a concerted effort to convey a sense of what it means for humanity that these two Luminaries rose successively above the horizon of the world. Of course, this will take different forms in different contexts, extending to a myriad artistic and cultural expressions, including songs, audio-visual presentations, publications and books. Such initiatives, coupled with widespread celebrations that are both uplifting and reverent, are also sure to spark the curiosity and wonder of many who may as yet be unfamiliar with the names of the Bab and Baha’u’llah.

Here we share 9 of the rich works of art found on bicentenary.bahai.org. Be sure to check out the site for a more!

An artist from Almaty, Kazakhstan, created this painting called “Intone, O my Servant, the verses of God.”

In New Zealand, the bicentenary logo was stylized in a Maori design called kowhaiwhai. The logo uses a kowhai ngutukaka pattern—which symbolizes conversation, community and new beginning—and a mangopare pattern—which symbolizes strength and power. The whole logo itself, signifies the rising sun at dawn, referring to the Bab’s appearance as a Manifestation of God.

In South Africa, an artist has produced paintings inspired by the Bab and His mission, particularly His call to strive to elevate all things to their state of “uttermost perfection” and excellence. Here is one of those paintings.

4. The Shrine of the Bab in watercolor

The Shrine of the Bab on Mount Carmel was rendered in vivid watercolor by an individual from Krasnoyarsk, Russia.

5. A visual expression of the Baha’i Sacred Writings

A digital artwork incorporates a passage from a prayer revealed by the Bab. The work was created as part of an art show held in Indianapolis, United States.

6. Children and youth beautify a basketball court in the Philippines

In preparation for the bicentenary of the birth of the Bab, children, youth, and adults in Bacoor, Philippines, came together over a few days to paint a mural on the walls of a neighborhood basketball court. The murals beautified the space that is used for many types of community functions. A watercolor workshop was also organized for the youth, during which they created artworks which will form part of the decorations for their celebrations.

7. Bolivian Andean embroidery made for the bicentenary

Sheep and alpaca wool from the Andes, spun and woven manually, make up this “earth cloth” embroidery from La Paz, Bolivia. The artist used natural dyes to color the wool in a traditional technique inspired by rural Andean culture. Pieces of these fabrics, sewn together, add texture and color to the design—a technique called appliqué. 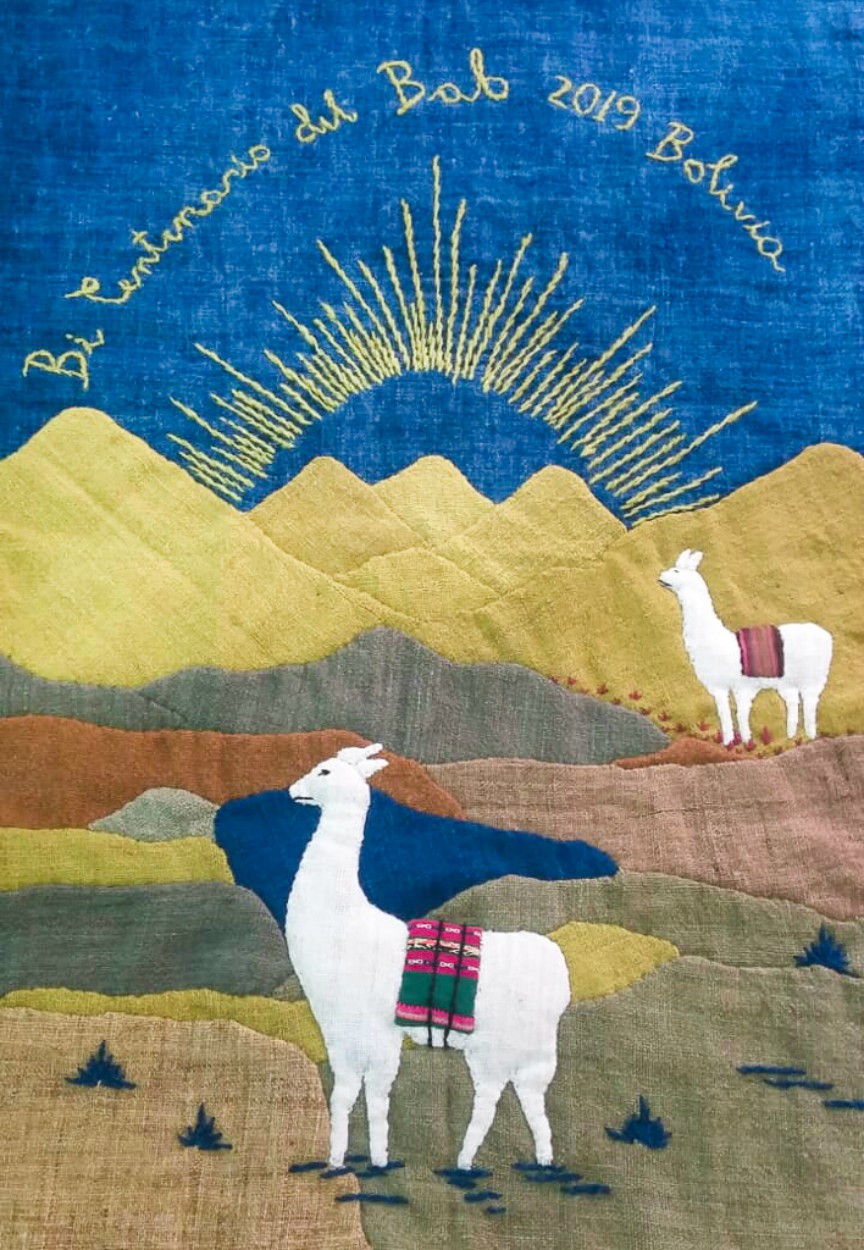 A children’s book titled,The Beginning of the Way was published by the Baha’i community of Ukraine and draws on selected stories from The Dawn-Breakers. The illustrations capture the journeys of the early heroes of the Faith.

9. Painting created in honor of the bicentenary

An artist in Lebanon has created this painting in honor of the bicentenary.

We hope this has whet your appetite to go and explore www.bicentenary.bahai.org for more artistic expressions in honor of the bicentenary of the Birth of the Bab. 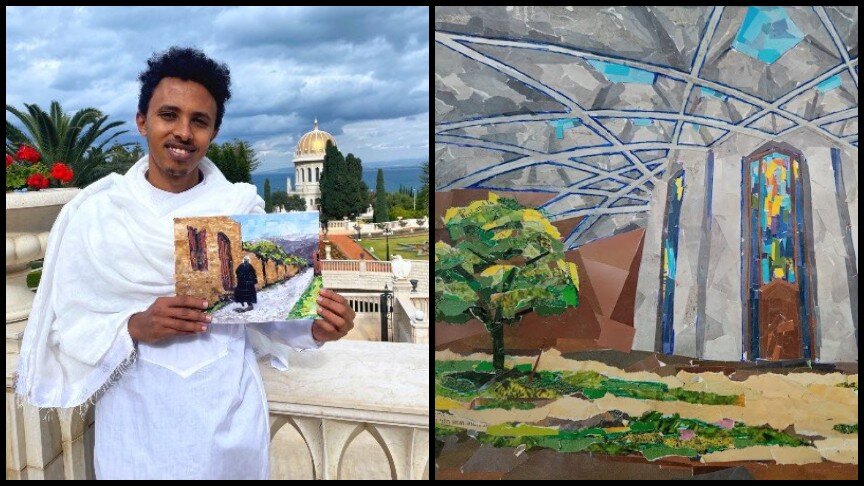 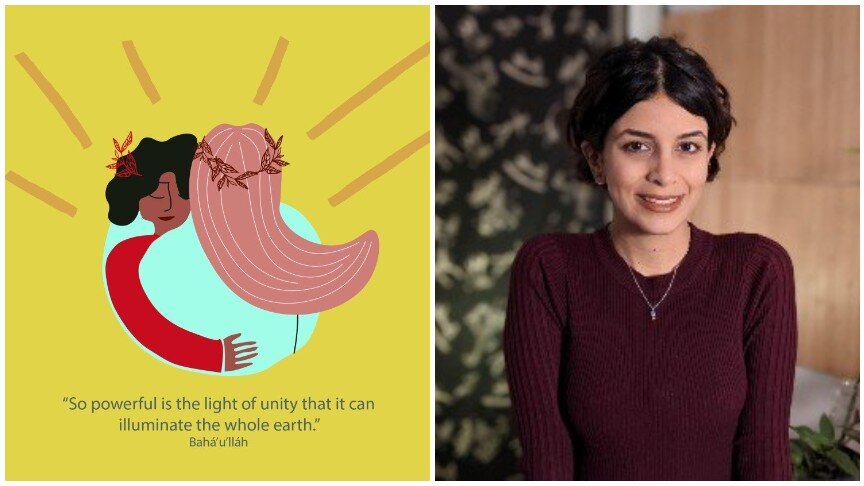 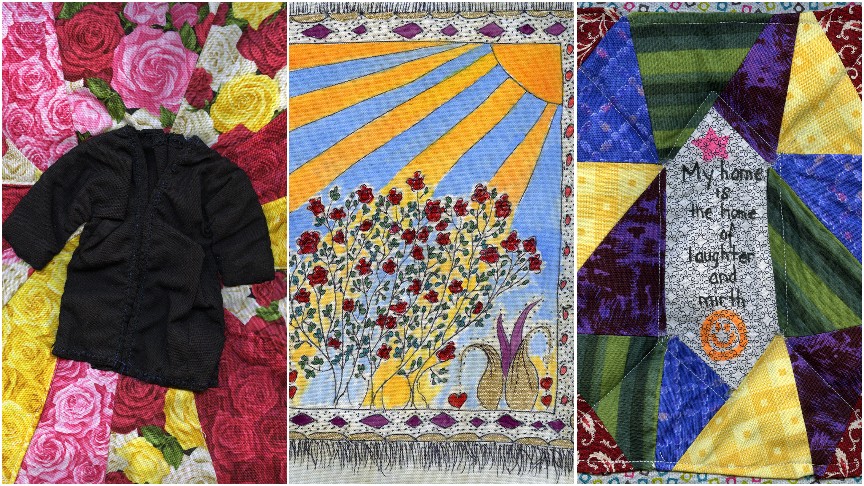 Hi there,
My name is Anis Alagandra Karpayah from Malaysia.
I did a few paintings for the bicentenary of the birth of the Bab.
Can i share it with you?

Hi Anis! Thanks for the message, and please feel free to send us an email: [email protected]