After a successful Kickstarter campaign, Elika Mahony has released an album in honor of the bicentenary of the Birth of the Bab and it’s befittingly titled The Exalted One. The 11 songs on the album set the prayers and Writings of the Bab to music with piano, cello, guitar, tiple, cuatro (South American instruments) and soaring voice.

I am eager and excited to share my conversation with Elika with you for two reasons: for one, it’s wonderful to shine a light on creative endeavors in these months leading up to the bicentenary of the Birth of the Bab but also because Elika is donating the sales of The Exalted One from May 23rd to July 10th to the construction of the Shrine of Abdu’l-Baha! Here is some more information about the album and how it came together:

Baha’i Blog: Could you tell us a little about how this album came together?

Baha’i Blog: What brought you the most joy while making this album?

Singing duets with my daughter, Amelia! Singing with her is always a highlight as we have been chanting prayers together since the moment she could talk. Another unique feature of this album is that my daughter agreed to contribute two of her compositions for this album! Her pieces, ‘Boundless Favours’ and ‘God is Sufficient’ bring a youthful spirit and diversity to the songs on the album which make it accessible to everyone and they have become favorites of many who have listened to the album.

Baha’i Blog: I understand you did a Kickstarter campaign for this project. How did that go?

The Kickstarter was exciting, challenging, joyful and a lot of work! I prepared six months in advance for it so that I could create some beautiful rewards and videos that expressed what the project was about. I was delighted and moved by the overwhelming support from friends around the world. We made our goal and extra funds for the next album.

Baha’i Blog: Was there anything else that was special about the process of creating this album?

I loved involving friends in the making of the album. Before I chose the passages for the songs, I asked everyone on my mailing list to share their favorite quotations from the Bab. I then chose those prayers and Writings that inspired me the most and delved into understanding and meditating on them so that I could set them to music in the most dignified way I could. The friends also chose the cover for the single I released that was shared with the backers at the end of the Kickstarter campaign.

Baha’i Blog: How did putting this album together differ from your album dedicated to the bicentenary of the Birth of Baha’u’llah?

On this album I worked with a talented producer in Columbia, Daniel Badi Rinaldi, so the music has more of a Spanish flavour than the music on The Ancient Beauty. I have always loved the flamenco guitar and I was thrilled that we were able to incorporate this beautiful instrument on three tracks. Working with Daniel was a joyful experience although it was a bit challenging at times as our time zones are opposite (literally 12 hours apart)!

Baha’i Blog: Was there anything else that particularly delighted you in the process of making this album? 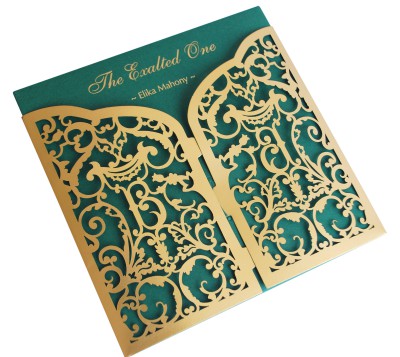 Designing the cover for The Exalted One was pure inspiration! I wanted it to be similar in style to that of The Ancient Beauty. Both covers feature a laser cut design of the gold wrought iron gates that lead to both the Shrines of the Bab and Baha’u’llah (in Haifa and in Bahji). Befittingly for the Bab, however, the cover of The Exalted One actually opens up as a gate, set against a deep forest green background.

Baha’i Blog: Which is your favorite piece on the album and why?

‘My Beloved’ is definitely one of my favorites. It is a short prayer from the Bab recorded in six languages with a diversity of voices from around the world. The song includes vocals in English (Elika Mahony), Spanish (Ali Youssefi), Swahili (Auntieclare Rezin), Chinese (Tracy Chen), Italian (Ali Gomez) and French (Elika Mahony). The piece has a joyous and celebratory tone and a delightful Spanish flavor to it, featuring South American instruments such as cuatro, tiple as well as percussion from different parts of the world. You can watch its music video here on YouTube.

Baha’i Blog: Are there any special features about the album?

As many friends expressed the desire to give the album as gifts to friends for their celebrations, this time we decided to include a sticker with a unique download code within each package so that friends without CD players can download the music with a code they are given inside the packaging. I made a timelapse video of how I assemble the album.

Baha’i Blog: What is your hope in releasing this album? 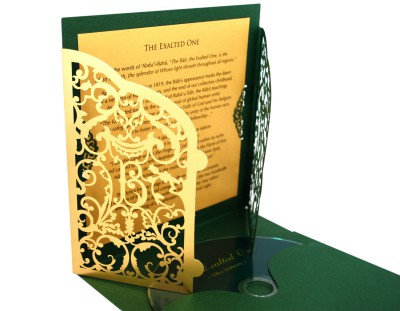 My hope in releasing the album was to create a dignified gift that can be given to friends, colleagues, family and neighbors as part of the process of acquainting as many people as possible with the life and teachings of the Bab and Baha’u’llah during this special bicentenary year. Hence, in addition to the music, I wanted the package to be a beautiful work of art that would in and of itself attract hearts. We also added a short introduction to the Bab so that recipients could understand more about the purpose of His mission.

Baha’i Blog: Anything else you want us to know about the release of the new album?

I was thrilled when I recently read that plans for the design and building of the Shrine of Abdu’l-Baha are now in process.

Upon hearing this exciting news, I immediately felt that I wanted to be a part of this historic process. Therefore I decided that all proceeds from the sale of The Exalted One will be contributed towards the fund for the construction of the Shrine of Abdu’l-Baha between the Declaration of the Bab (on May 23rd) and the Martyrdom of the Báb on (July 10th).

Baha’i Blog: What other projects are you planning?

The next album I am planning is for the third of the Central Figures, Abdu’l-Baha, in honor of the centenary of the public reading of the Will and Testament of Abdu’l-Baha.

We are also in the middle of writing Volume III for the Hands of the Cause of God booklets.

Baha’i Blog: Thank you, Elika, and congratulations on creating a beautiful musical tribute to the Bab in this historic year! You can download and purchase ‘The Exalted One’ here: http://bit.ly/TheExaltedOneCD

Here is a music video for ‘Prayer for Protection’, one of the songs featured on the album:

What a wonderful article about this inspiring music and the woman behind it. Thank you, Sonjel, and, especially, thank you, Elika.

We also wish to let your readers know that this CD is now available through BahaiBookstore.com (Baha’i Distribution Service U.S.) at bit.ly/eocdbds along with other Elika Mahony CDs. For instantly downloadable and CD versions of Elika’s music please visit our digital music store, BahaiMusicStore.com. Thank you.

Such a wonderful album! I’ve had this on repeat the past few weeks! 🙂

Beautiful song of prayer of about going thru adverisities I repair for refuge. I will have something done to me medically in future so l ponder this by listening to this prayer. Thank you elika