Featured in: The Birth of the Bab and The Martyrdom of the Bab

Afshin Jaberi and I met in the year 2000 during a summer school in Almaty, Kazakhstan. This was where I first heard a beautiful piece that he composed for a drama inspired by The Dawn-Breakers. Back then he was engaged in his post- graduate studies at the Almaty Conservatoire while serving the Baha’i community of Kazakhstan. Born into a Baha’i pioneering family, Afshin Jaberi was deeply affected by the early history of the Baha’i Faith, the hardships of its Founders’ lives, and the heroes who sacrificed everything for the establishment of a new religion. Later in life Afshin found a creative outlet in music to convey his emotion and feelings about those historic events. I reconnected with Afshin to talk about his music and his recent album, Eroica, which is a musical tribute to the Bab.

Baha’i Blog: Hi Afshin, please, tell our readers about yourself.

I was born into an Iranian family, which pioneered to Qatar. Due to lack of proper music education there at that time, I began to develop my interest in the subject by myself. My musical education began properly in 1991 in Hungary, where I attended the Franz Liszt Academy of Music and received my bachelor’s degree in Music Education. Although I was studying to become a pianist, my compositions also attracted attention. I continued my post graduate studies in Kazakhstan and obtained there my PhD in Pedagogical Science. Again, my compositions were noticed by my fellow-students and got the attention and respect of my teachers. As an exception, I was asked to perform my own pieces alongside the works of the standard classical repertoire for piano examinations and graduation concerts.

Baha’i Blog: What genre of music do you work in?

Mainly my compositions are instrumental, especially for piano. I have arrangements for my ballades, composed for piano, to be performed with an orchestra, and have also composed music for a drama about the Life of the Bab, which is for viola or violin, accompanied by piano, and has parts for chorus; it’s arranged as well to be performed by a large orchestra.

I also composed short melodies for few Arabic lyrics from a children classes book, and put some of the quotations in Arabic from the children classes grade 1 materials into music for my daughters.

Baha’i Blog: Tell us about your latest album ‘Eroica’, what is the meaning of the title and what or who is it dedicated to? 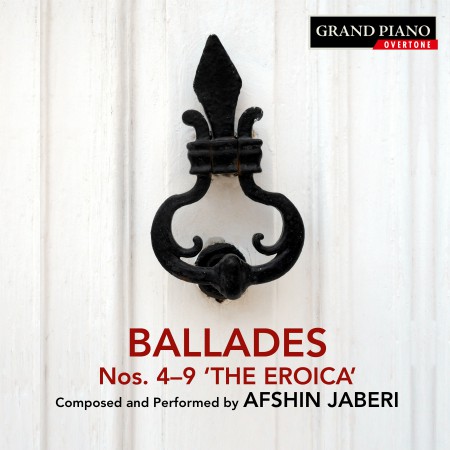 The title Eroica means “heroic”, and it’s the title of the cycle of my nine ballades for piano that describe the Heroic Age of our beloved Faith. The first three ballades capture the period from the Declaration of the Bab till His Martyrdom; they were published in my first album, titled The Bab, which was released in 2015.

In my second album, Eroica, I recorded the rest of the remaining six ballades, which describe the period after the Martyrdom of the Bab from the historical episode of the imprisonment of Baha’u’llah in the dungeon called “Siyah Chal”, or the Black pit, until the life of Abdul-Baha, with whom ended an unprecedented chapter in the history of mankind: the Heroic Age.

I released the album in October 2019, and it was dedicated to the 200th anniversary of the Birth of the Bab, which the Baha’i world celebrated that month.

Baha’i Blog: Could you describe your creative process? It seems like your music is mostly inspired by the historical events or characters of the Baha’i Faith. Which Baha’i Writings inspire you to create music?

Since childhood I was inspired by the stories of the Bab and Baha’u’llah and the early believers, who readily sacrificed their lives to promote the principles which were revealed to mankind for today. These stories helped me personally, from an early age, to face the many challenges in our pioneering post, and enabled me, somehow, to relate to the sacrifices of the heroes of that age.

This was an attempt from my side to shed light on what was one of the most dramatic periods of the history of humanity.

Baha’i Blog: I know you like to combine classic European and Middle Eastern melodies in your music. How many instruments do you play, and what is your favorite instrument besides the piano?

The region and the historical episode, which my music is describing, naturally brings this combination of western and eastern influence in my music. Of course, this is in addition to my ethnical background and the country I was brought up in, as well as my music studies as a pianist, learning classical pieces of European composers, which shaped my techniques in both composing and performing, and which made way for western and eastern harmonies and melodies to influence my music.

Recently on my artist page in social media my teacher shared his memories and the first impression he experienced listening to the opening theme of my first ballade, which I started composing when I was 18. He wrote about the distinction made of the influence of my home country in my compositions. It was very moving for me that he was able to recall that moment after 28 years.

Unfortunately, I don’t play any other instrument; usually, in such professions, such as a piano teacher and classical music performer, one is dedicated to one instrument.

I enjoy listening to many instruments, especially how they sound in orchestra. Since I work on orchestration for some of my music, it’s very important to imagine the sound of different instruments to convey the image and emotions behind the music.

First, let me answer why music education is important. For me, personally, the answer to this question is in the verse revealed by Baha’u’llah in the Kitab-i-Aqdas, the Most Holy Book, regarding listening to music:

“We have made it lawful for you to listen to music and singing. Take heed, however, lest listening thereto should cause you to overstep the bounds of propriety and dignity. Let your joy be the joy born of My Most Great Name, a Name that bringeth rapture to the heart, and filleth with ecstasy the minds of all who have drawn nigh unto God. We, verily, have made music as a ladder for your souls, a means whereby they may be lifted up unto the realm on high; make it not, therefore, as wings to self and passion. Truly, We are loath to see you numbered with the foolish.”

From this verse we realize that music is a form of art that influences our spiritual conditions, and is regarded as a ladder for the soul to progress. Of course, this subject is very deep and needs many separate articles to be dedicated to it, but reflecting on the verse of Baha’u’llah should allow us to begin to understand the effect of music on us, whether as individuals, or as a society, as well as the standards and conditions that Baha’u’llah is guiding us to follow when we listen to music, which, consequently,  become the values and the frame of mindset that a musician should shape in the process of creating or performing music.

My personal effort to establish music education in Qatar was to make the subject of my thesis about introducing music education in the public schools of Qatar, but unfortunately, due to many challenges, I couldn’t implement that.

Baha’i Blog: Are you currently working on any new projects or albums?

Currently I’m working on a few compositions, which I started many years back, that were not completed; as well as refining some older compositions.

Another possible project could be recording the music for a drama about the Life of the Bab I composed in my early 20s. My producer listened to it by chance, as well as a few musicians who showed interest in the music when I performed it on several occasions. This encouraged me to consider recording it, although I’m still not sure if I will be publishing it soon.

Other projects include the recording of my piano compositions.

Baha’i Blog: Afshin, thank you so much for sharing your story and your vision. It seems to me that this particular album could be used by Baha’is for various holy day events or even as an additional material for those who study Ruhi Book 4 or ‘The Dawn-Breakers’. We are looking forward to listening to your new pieces!

You can purchase Eroica here on Amazon.

Irina is a Baha’i who enjoys studying the history of the Baha’i Faith. She is a photographer, an artist, and an aspiring writer. In her free time she enjoys cooking, and spending time with her family. She loves staying in touch with nature by growing fruit trees, flowers and herbs on her small patio. Irina is a book collector, reader and a frequent museum visitor, a world traveller and a cultural explorer. She currently resides in California with her husband and her daughter.

Beautiful interview, Irina, and the most touching, soul-stirring music, portraying the heroism of the Central figures and early believers!