Ramine Yazhari has released a devotional album in honour of the bicentenary anniversary of the Birth of Baha’u’llah. The album is titled Rejoice and its melodies are soaring (you can stream it here on Bandcamp). Last year, Ramine released a single called ‘This Newborn Child’ and I listened to it over and over and over again, finding inspiration each time I heard it. You may also recognize Ramine’s voice from his devotional album dedicated to the centenary of Abdu’l-Baha’s travels to the West, Long Journey. I was glad to learn that Rejoice had been released and Ramine very graciously agreed to tell us a little about how the album came together. I hope you enjoy our conversation:

Baha’i Blog: Hi Ramine! Thank you for agreeing to be interviewed about your new album, ‘Rejoice’! Could you please tell us a little bit about yourself and your work as a musician?

Sure. First of all, let me say that I love Baha’i Blog. It’s been a joy to discover so many talented musicians and other artists from all over the world on this site, so thank you for all your efforts to highlight all of these wonderfully diverse individuals and their creative efforts.I’m from the US, living for the last 15 years with my wife and kids in Portland, Oregon. Music has always been one of my great loves. I grew up playing piano and later guitar, and early on fell in love with music composition. I’ve been trying to write music ever since.

Baha’i Blog: How did ‘Rejoice’ come about? What was the inspiration behind it?

Like many others, I was just blown away by the recently translated Baha’i Writings in honor of the Birth of Baha’u’llah and other Baha’i holy days that were published in the volume, Days of Remembrance. It is such a treasure trove of beauty and poetry and majesty and inspiration, with so many diverse passages and modes of expression, and such incredible imagery and rhythms that are calling out to be set to music.As the worldwide commemoration of the bicentenary of the Birth of Baha’u’llah approached, I wanted to at least record a few new songs using words from these amazing sacred Writings in honor of the occasion.

Baha’i Blog: What was something you learned in the process of composing the album? 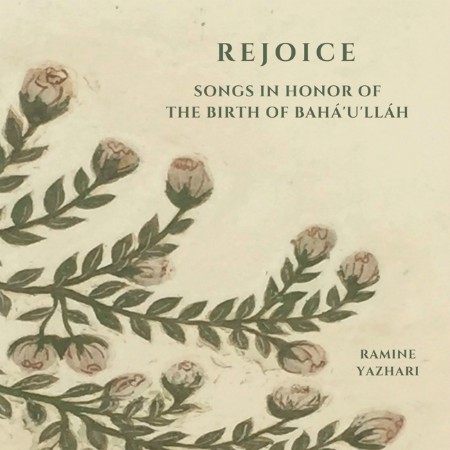 One of the benefits of setting the Baha’i Writings to music is that the process itself becomes a means of immersing yourself in these special words. By setting them to music, I’m able to develop a more intimate relationship with these passages, memorizing them and thinking about them and singing them to myself throughout the day, coming to appreciate their depth and power more and more. For example, the song ‘This Newborn Child’ uses as one of its lines a passage related to the significance of the Birth of Baha’u’llah—moving from the gentle ‘and the trees have swayed,’ to the powerful ‘and the oceans have surged,’ to the fantastic ‘and the mountains have taken flight’—wow! I still think about this line all the time.From the standpoint of music composition, I deliberately set out to write the first song ‘The Heavenly Nightingale’ in 5/4 time, something less common for me, but I love the effect of feeling like you are always falling forward into the next measure. The 5/4 time signature required me to try new rhythms and word arrangements in the melody than what might have come naturally in 4/4 or 6/8 time.

Baha’i Blog: What was a challenge in putting the album together?

For me there are lots of stimulating creative challenges in creating an album of devotional music: trying to harmonize a sense of reverence with music that is also interesting and compelling in and of itself; finding a way to create a spirit that transcends the particular and is accessible to the widest possible audience; staying true to the original sacred words while framing them in a musical interpretation.I’m grateful to my very talented friend Jon Rezin who produced the album and was my collaborator in trying to meet these challenges. I’m also grateful to family and friends who lent their voices and talents to the recordings to make them the best they could be. I’m especially happy I was able to sing with my daughter Julia on ‘The Heavenly Nightingale.’

Baha’i Blog: What projects are you working on now?

There are always too many ideas for projects and not enough time. As far as Baha’i-inspired music, I am working with my friend (and amazing producer) Kelly Snook on several songs of excerpted passages from the Naw Ruz prayer set to music. I am also working on an album of passages from The Hidden Words set to music, tentatively titled ‘Nine Hidden Words’ but if I run out of time may be changed to ‘Five Hidden Words’!My ‘day job’ is as a physician working in the children’s and adult emergency departments of one of the hospitals in Portland. I have a number of musical colleagues, and so I also have an evolving project of songs inspired by the dynamics and challenges and deeply meaningful work of caring for one’s fellow human beings when they are ill or injured.

Baha’i Blog: This is truly inspiring! Thank you for sharing, Ramine, and I wish you all the best with your future projects! I’ll be keeping an ear out for them!

You can purchase and download Rejoice here on 9StarMedia and you can download and purchase ‘This Newborn Child’ here as well. You can also stream Rejoice online on Ramine’s Bandcamp site: http://bit.ly/2B1m60u

This wonderful album by Ramine Yazhari is also instantly downloadable from BahaiMusicStore.com; a CD is also available. Come to listen to track samples and learn more here: http://bit.ly/rejoicebms .