Most Baha’is can probably relate to the frustrating fact that so much of the music we hear on the radio and on the charts right now have awesome beats and catchy tunes, but the lyrics are… well, let’s just say that they’re not very good for the soul.

Enter Karim, who’s one half of the popular Baha’i R&B/Hip-Hop duo Nabil & Karim, and he’s trying to change that!

Karim has embarked on a lyrical remix mission. His aim is to create a 10 song remix album aimed at shining new light on some of our favourite songs by recreating and rewriting the lyrics in order to make them more meaningful and ‘elevated’.

By using GoFundMe.com to raise enough money, Karim aims to have the album completed by October this year, and as he works on the tracks, he’s posting some of them on Youtube.

I decided to catch up with Karim once again, to find out more about this initiative.

Baha’i Blog: Hi Karim, can you tell our readers a little bit about how this initiative came into being?

Well, myself and a few others close to me were becoming more and more appalled at the lyrics that are being allowed to float through the airwaves. So after the conference in Arizona where I gave a talk on “A year of service”, I challenged the audience to make personal goals and I joined them. One of my goals was to use popular instrumentals to create rap songs that shined a new light on some the most well known songs of this generation. So I decided to upload a series of YouTube videos just casually rapping over instrumentals into the webcam. This process started in January of this year.

Baha’i Blog: Why do you think this sort of thing is so important?

I truly believe that music is a tool which we can use to access our inherent nobility. Because of this belief, I am constantly striving to find new and creative ways of encouraging such the noble use of such a widely poisoned art form.

Baha’i Blog: How have you chosen which songs to work on?

I try to choose songs where I love the beat and dance to it or nod my head to it, but when I listen to what’s being said I laugh out loud from feeling uncomfortable because I know that families are listening as well and millions of youngsters are polluting their brains with hyper-sexualized false perceptions of love.

Baha’i Blog: It’s a great idea and do you think this is this something you’re going to just keep doing over the years?

I am confident that these lyrical remixes will continue well into the future. It’s something I love doing and people are saying they like my versions better!

Baha’i Blog: Thanks Karim! It’s a great initiative and I can’t wait to hear the album!

You can support Karim in this endeavour by going to his page on GoFundMe.com, and below is an example of the type of thing that Karim is working on. It’s a track called Paths of Delusion, and it’s based on Flo Rida’s song called Whistle – but the lyrics take the song to a whole other level. Check it out! 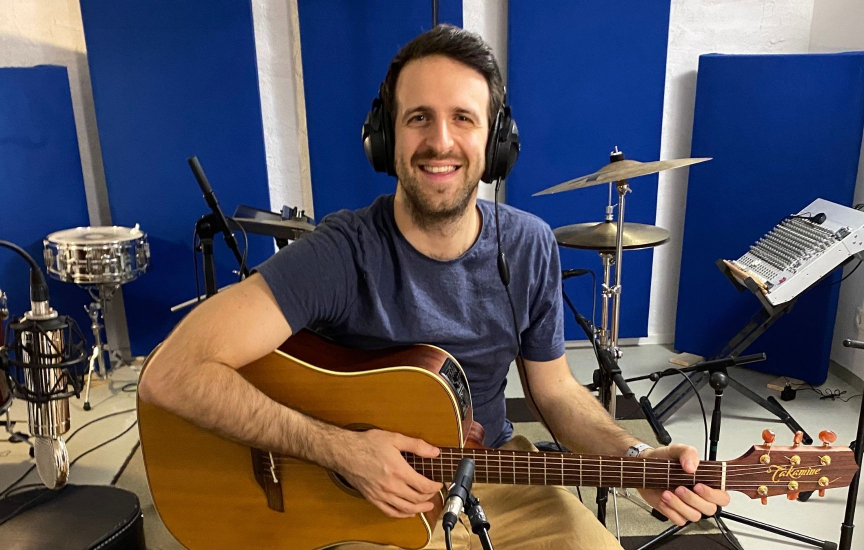 I don’t get why these talented musicians don’t just make their own music. Express themselves and leave those negative songs behind.

Thanks for doing this interview! Great initiative – so good to read about it 🙂

Music is an art form whose medium is sound and silence, wrote one analyst. Its common elements are pitch which governs melody and harmony, rhythm and its associated concepts tempo, meter, and articulation, as well as dynamics and the sonic qualities of timbre and texture. The word derives from a Greek word meaning “the art of the Muses”. In our pluralistic planetary culture there are 1000s, if not millions, of Muses inspiring lyricists and musicians with a dog’s breakfast of words and so many different directions in relation to content that any unity of expression is possible, even if desirable.

The problem is also present in virtually all of the social sciences and humanities, as well as the physical, biological and applied sciences. We all have to pick and choose from the immense blogosphere and its myriad of commentariats. To each their own in our wide-wide-world of 7.3 billion people, 1 billion websites and 3 billion internet users.

The creation, performance, significance, and even the definition of music varies according to culture and social context. Music ranges from strictly organized compositions and their recreation in performance, through improvisational music to aleatoric forms. Music can be divided into genres and subgenres, although the dividing lines and relationships between music genres are often subtle. Sometimes those dividing lines are open to individual interpretation and occasionally to controversy. Within “the arts”, music may be classified as: a performing art, a fine art, and an auditory art, among other classifications. It may also be divided among “art music”, “folk music”, and classical music, among several other forms. There is also a strong connection between music and mathematics.

I’ve been writing about music for many years and readers with an interest can go to this link at my website: http://www.ronpriceepoch.com/Music.html The information on music in cyberspace is now burgeoning. The philosopher Nietzsche said: “Without music, life would be a mistake”. There is a great deal written about the degeneration or musical lyrics and I encourage readers with an interest in the topic of this interview to do some Googling. The craving of our modern world for actors and visual sorcerers, for psychological bewilderers and utopian idealists who are able to conceal their own ill-health and their myriad weaknesses is deep and profound. Those who would please us by intoxicating and exalting the basic instincts are legion and they can be had with the push of a button. And millions, indeed, billions, are pushing those buttons.

In my haste to publish the above post I made two errors. Readers should note these two errors of expression, of more than a little importance to me, if not to others. In paragraph one, the words “any unity of expression is possible, even if desirable” should read “any unity…..is impossible…” In the last paragraph, the words “the degeneration or musical lyrics” should read “the degeneration of musical lyrics.”

YEAH!
These guys are awesome.

What about copyright issues? I know that doing covers is legal, but I am not sure about changing the words of songs in a cover (perhaps it would, ironically speaking, fall within the domain of parody/satire laws).

(I am NOT a lawyer BTW, but I have read quite a bit about IP)

I checked, with respect to US copyright law, you are (fair use considerations aside) basically breaking the law if you do not have the necessary approval of the composer. You are allowed to get a compulsary “mechanical” license for audio-only redistributions (called “covers”) under a few conditions which require the payment of royalties (and this does NOT include making a derivative version with new lyrics). You also do not have the right to associate a cover recording with any video, even if you have created the video (this requires a synchronization license).

Yes I know, these copyright laws are antiquated and unfit for our digital 21st Century. But, IMHO, unjust laws should be petitioned against (especially in a democratic society), and not deliberately disobeyed.

Sorry for the harsh answer, I have Asperger’s Syndrome.